The Cyclades in Greece are one of the best destination one can choose. The atmosphere is laid back, the colours of the sea are stunning, the food is great, the people are nice, and it’s easy to reach almost any island by boat or ferry, not to mention that they are extremely diverse as landscape and specific.

With their rugged profiles and generously sprinkled with snow-white villages and blue-domed churches, the Cyclades have something for every taste.

There’s extravagance for party people on Mykonos and Ios. Lots of spectacular routes in Amorgos, a tiny island of only 30 km length but rising abruptly at almost 800 metres above sea level. 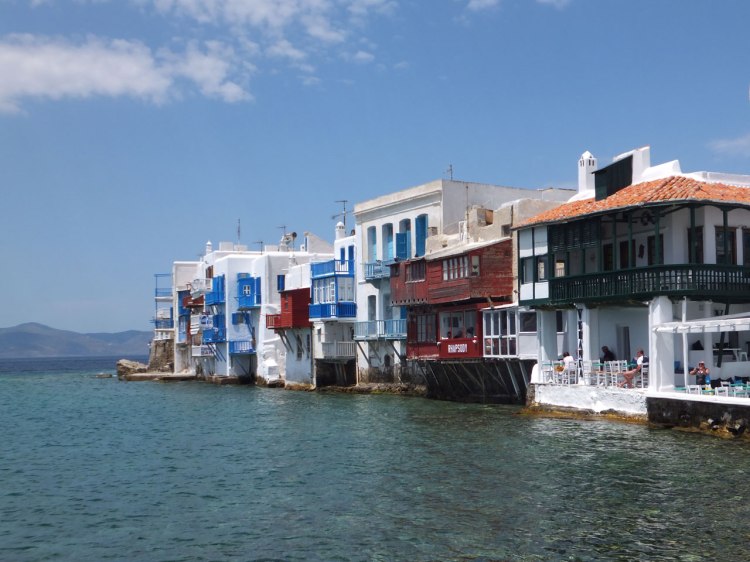 The town of Naoussa in Paros might be the best option for gourmet dinner or relaxing at a terrace on the cobblestone beach nearby. While Loutra in Kythnos is a relaxation oasis with warm thermal springs. 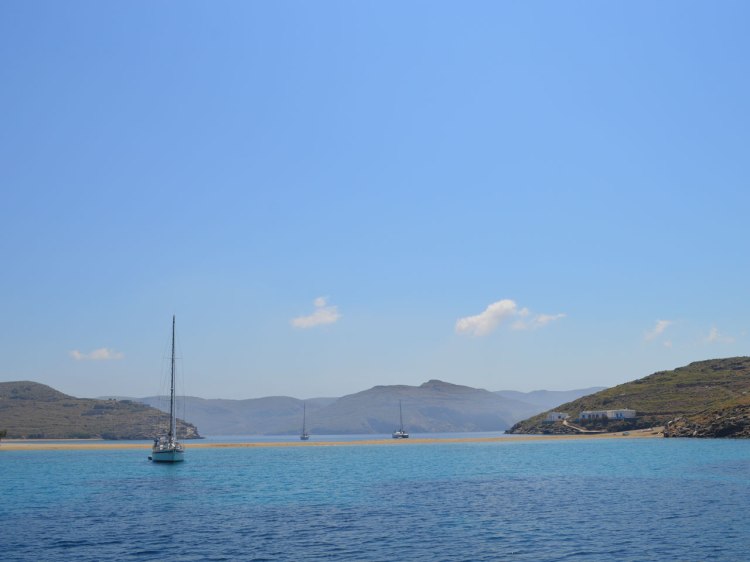 Ermoupoli in Syros offers the perspective of a town climbing on two almost identical hills that rise closely from the harbour and was once the most important Greek port.

And Oia in Santorini offers the reverse image: that of houses descending the abrupt caldera of the former volcano, in a vivid succession of terraces, roofs and pools, and is among the most photographed places in the whole world. 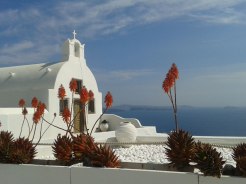 The way we saw all these islands was by renting a boat and sailing and living and cooking and sleeping on the boat for some 11 days. Actually that was the most fun part, including many ultra tasty meals we prepared on the boat with the fish fished by the boys, a night of sailing under the full moon, sunrises, sunsets, land sickness and great time spent together.

While here, on any of the islands (well maybe except for Oia which is the most expensive) there are some very local and authentic things to taste, and here are some of the most accessible and nice.

A good morning here starts with Greek (actually Middle-Eastern) coffee: sand coffee. It is usually found in any kafenio, a venerable institution (veritable social institution of any dwelling) still found in most cities and villages despite the mass global imminent influences.

Kafenio (plural kafenia) is the traditional Greek coffee-house, but you can also find here ouzo, brandy, beer, sage-based tea known as tsáï vounoú, soft drinks and juices, as well as the old men of the village reading their newspaper and commenting the news.

The kafé frappé, or instant coffee with sugar and optionally condensed milk, is one hundred percent Greek despite its French name and, like Greek coffee, always comes accompanied by a glass of water. Invented in 1957 by a guy in Thessalokini, frappé is now the hallmark of outdoor Greek coffee culture.

For coffee and a sweet thing, you can stop at a zaharioplastía, a café-patisserie where they also serve yoghurt and honey and sweet delights like the loukoumádhes – or the Greek deep-fried batter puffs dusted with cinnamon and dipped in syrup.

Ouzo is said to be invented in the monasteries of Mount Athos in Greece in the 14th century. Even today, in Amorgos island for instance, if you go visit the scenic monastery of the island, the monks will serve you a glass of ouzo at the end and also engage in lively conversation with anyone able to communicate a bit in Greek.

Ouzo is served by glass to which you can add water and / or ice. Once every ouzo was automatically accompanied by a small plate of mezédhes on the house: cheese, cucumber, tomatoes, a few olives and sometimes octopus or a couple of small fish, but nowadays the ouzomezés is a separate and pricier option.

Still even today if you will order a karafáki – or the 200 ml ouzo carafe to share with your friends, it will most probably come accompanied by some snacks on the house.

The chief summer socializing time for an ouzo is from 6 to 8 pm (similar timing to the Italina aperitivo) but it’s pretty often for people continue drinking it over dinner.

The southeast coast of Amorgos is unrelentingly steep and is home to an extraordinary monastery built into the base of a soaring cliff in 1017 (images above). The opposite coast is just as spectacular, but softens a little, and the enchanting little town of Chora, also known as Amorgos, lies amid a rocky landscape high above on the plateau. Its streets are filled with colourful flowers contrasting the white walls.

Naoussa has gradually turned from a quiet fishing village into an increasingly stylish destination. Perched on the shores of the large Plastira Bay, Naoussa has good beaches nearby, excellent restaurants and an ever-expanding number of chic beachside hotels, cafes and bars. Behind the waterfront is a maze of narrow whitewashed streets.

One of the most famous restaurants in the whole island, Barbarossa runs their business since 1963 in the picturesque harbour of Naoussa. They serve quality ouzo and fresh shellfish, marinated fish, seafood and fresh fish, and their pasta and risotto deserve special mention. Their prices are high but the atmosphere is nice and the views of the traditional fishing boats and the Venetian Castle of Naoussa are great. And Fotis, and art cafe with contemporary Greek art on the walls, just a few minute away from Barbarossa, is my favourite place for coffee, especially at their beach terrace. By night they have excellent live DJ sets. 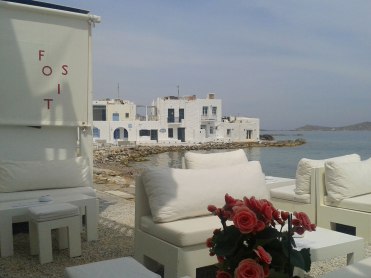 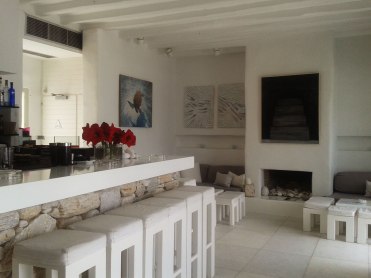 Loutra village in Kythnos still preserves its traditional character despite the touristic development. The beautiful marina of Loutra is one of the trademarks of the place, welcoming many boats and private yachts all year round. The main reason Loutra is a popular destination is its famous hot springs and its Hydrotherapy Center. Two of these hot springs are free to use and pour into the sea on the right side of Loutra beach. 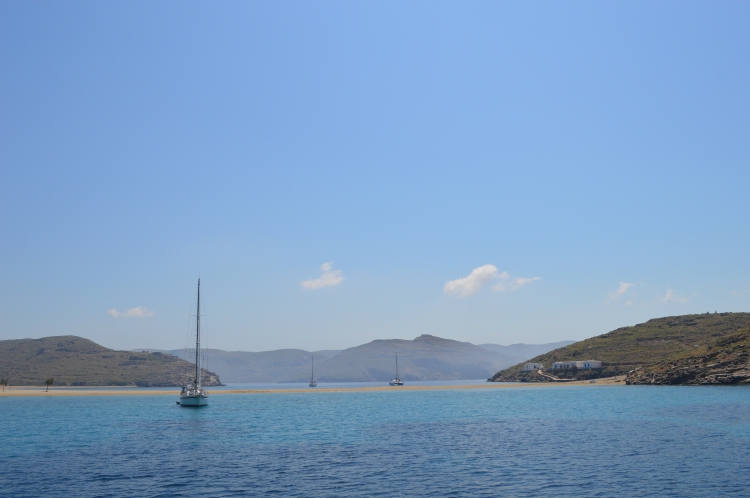 As you sail into striking Ermoupoli, named after Hermes and formerly Greece’s main port, its two peaked hilltops emerge, each topped by a church, the Catholic Ano Syros built first and the Greek Orthodox Vrodado in the 19th-century. 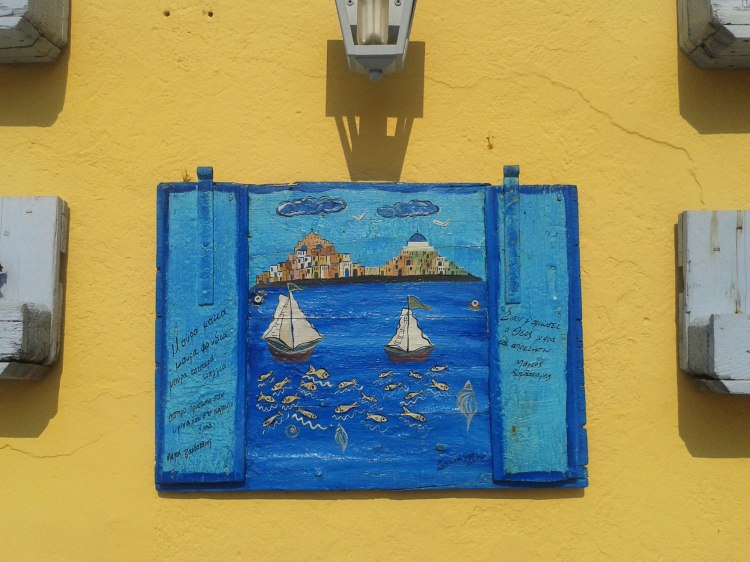 Buildings spread in a pink and white cascade covering both hills and the centre is a fun maze of stairways, shopping streets and neoclassical mansions.

Right on the northern tip of the island, the village of Oia was completely rebuilt after the devastating earthquake of 1956. On the steep slope of the caldera the houses nestle in niches cut down into the volcanic rock (the volcano erupted about 3,700 years ago).

Oia draws enormous numbers of tourists, and overcrowding is the price it pays for its good looks. It seems that everything in Santorini (officially Thira) is volcano related, from the famous Akrotiri site where you can see how people lived before the eruption to the taste of local food. While here, and preferably by the beach at a local taverna, try their famous Santorini Salad with local tomatoes and mizithra cheese, a fresh sheep and goat milk cheese originally from Crete but which you can find anywhere in Greece, Cyprus and Turkey, even if under different names.