Since it opened, more than 20 years ago, the Guggenheim has held over one hundred exhibitions and received over ten million visitors. And it is something pretty unique. It is iconic for vanguard architecture and stands out as a symbol of how a city can re-invent itself. Today the Bilbao or Guggenheim effect means heavy cultural investment that led to an economic uplift.

In the 19th and 20th centuries the growth of Bilbao was associated with shipbuilding and iron and steel industry. The Port of Bilbao was one of the largest in Europe and connected the main European cities sending off ships of crude oil or refined oil products, iron ore and coal. In 1973 the economic crisis hit Bilbao hardly. Then it was this tidal river that forced the once industrial city to change its ways, when in 1983 it spilled its banks and caused a catastrophic flood, partly submerging many of the medieval buildings of the Casco Viejo (Old Town). A few years later, the Basque government began to repossess former industrial land and transform it into something new, with the old shipyards as the focal point. Today, this area, Abandoibarra, is almost entirely made up of modern 20th- and 21st-century architecture. 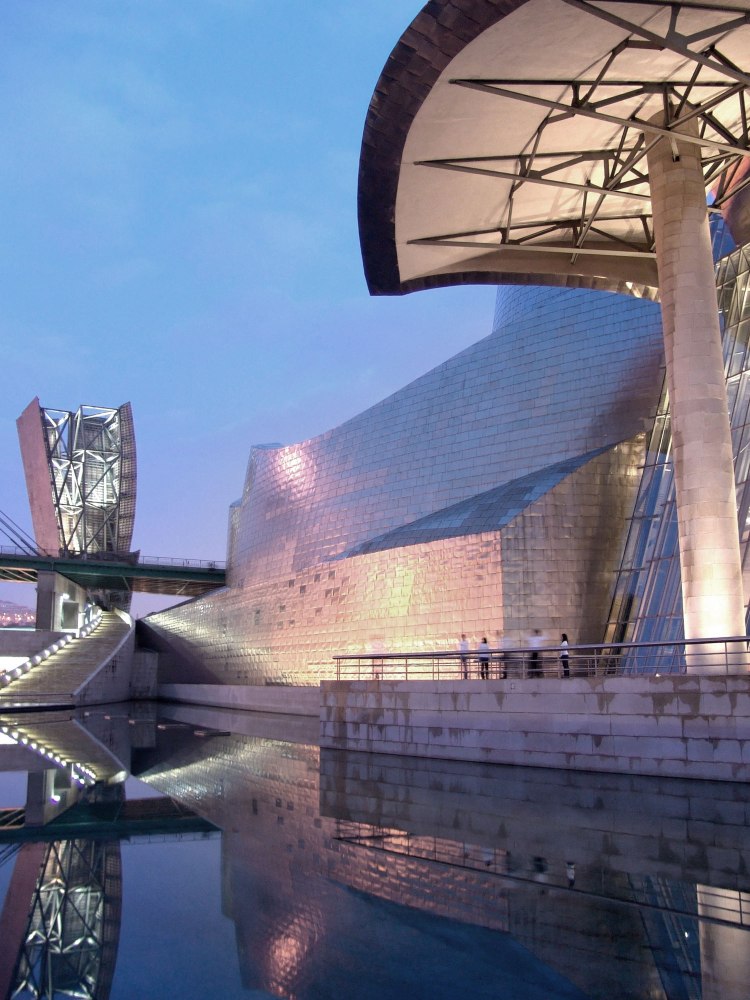 The sinuous structure of the Guggenheim museum was created by architect Frank Gehry using the software for airplanes, CATIA, which allowed for complex designs and calculations that would not have been possible a few years ago‭.

The large‭, ‬light-filled atrium serves as the organizing center of the museum‭, ‬distributing 11,000‭ ‬square meters of exhibition space over nineteen galleries‭. ‬Ten of these galleries follow a classic orthogonal plan while nine galleries have by swirling organic forms clad in titanium‭. ‬The largest gallery is 30‭ ‬meters wide and 130‭ ‬meters long and houses a permanent installation called the Matter of Time‬‭ ‬by Richard Serra‭.‬

In the area around the museum there’s more than the building itself. Kapoor’s monumental Tall Tree and the Eye (2009) is an installation of of 73 spheres that reflect and refract one another creating and dissolving form and space. Images of the surrounding city, including the Nervión river and the museum itself – are cast into suspension. As for La Salve, the red bridge near the Guggenheim, it is the first bridge in Spain to be built with the cable-stayed system, back in the 70’s. L’arc rouge, the great red gate by the French artist Daniel Buren, was added in 2007, on the 10th anniversary of the Guggenheim.

One thought on “Bilbao. The Guggenheim”