The Greek Cyclades form a circle (that’s what the name means in English) around the mythical island of Delos. According to the Greek mythology, Poseidon, God of the sea, furious at the Cyclades nymphs, turned them into islands. And, from this legendary circle, this is the island with the most authentic vibes, for me: Kythnos. 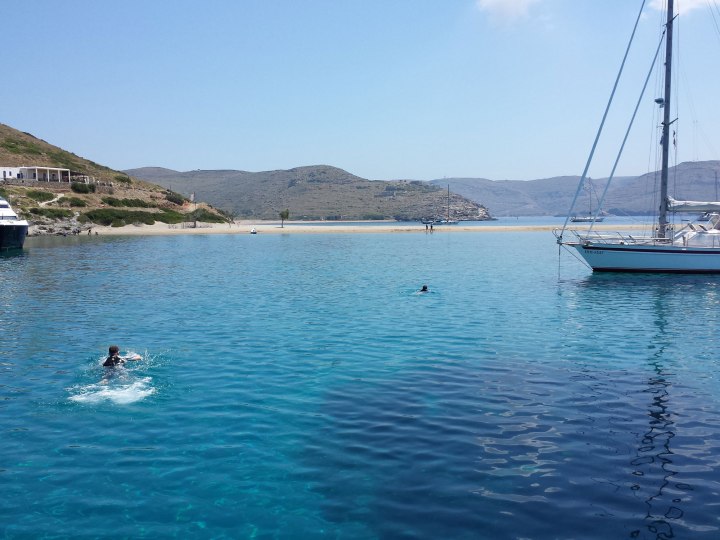 Fishermen boats, white houses, pink bougainvillea flowers, turquoise waters, sun and tranquility – briefly, unspoiled paradise, where time seems to have stopped and worries – gone away. That’s what one finds in Kythnos, only 2 hours away, or 26 nautical miles, from the mainland port of Lavrio, from where we start our regular sailing trips. 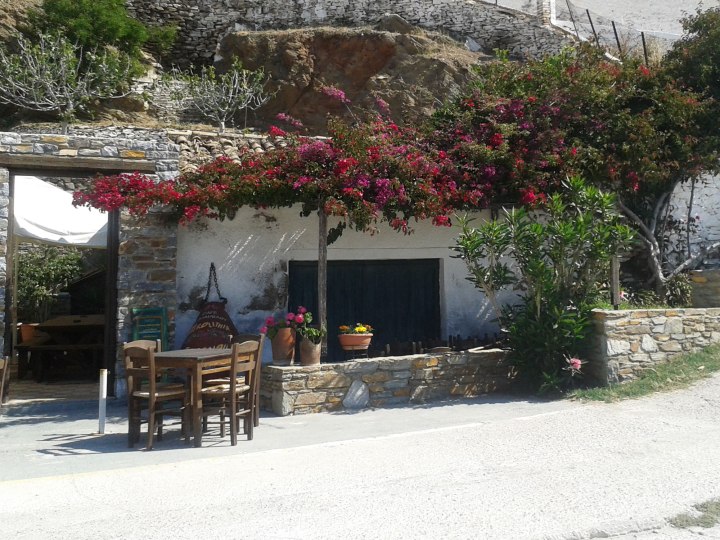 The port town of Kythnos island, Loutra, is actually the first stop for many who sail the Cyclades from Attica. It’s a well protected harbor with small marina for yachts. Right in front pf the docks, tavernas with good fish and meze have their tables going right down to the sea.

The island has some picturesque villages including, besides Loutra, Chora Kythnos – the main town, and Driopida, and they all stand out for their whitewashed houses, traditional taverns, windmills, and fountains, strollable alleys and laid-back atmosphere. 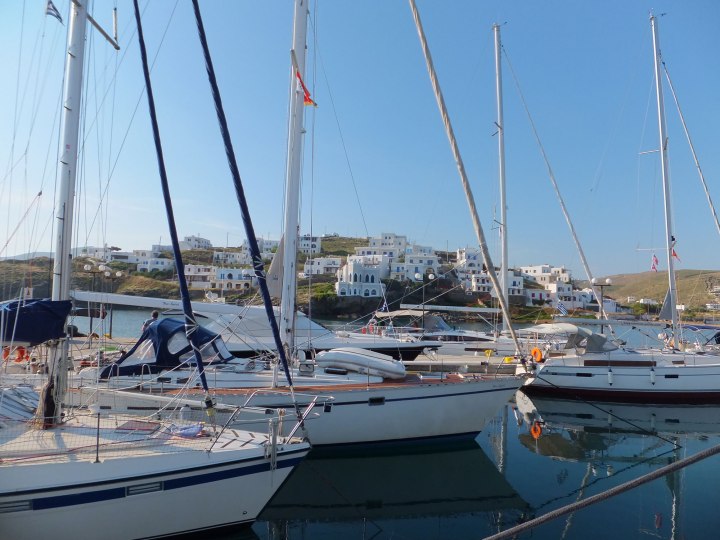 The coastline of Kythnos is dotted with almost 100 beaches and, from shingle to sandy and from organized to unspoiled, they all have a relaxing ambiance and are ideal for swimming. The most impressive is Kolona, a long strip of sand forming two sandy beaches on both sides. 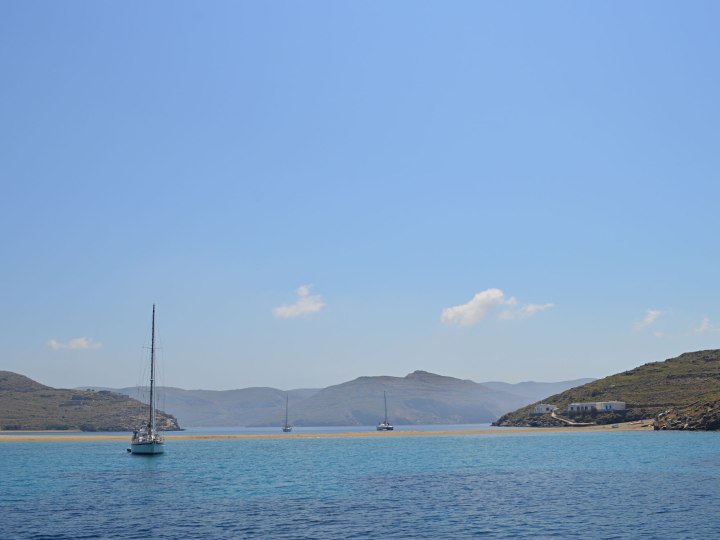 Thermia is the name the inhabitants have given to their island, even from the 12th century A.D., due to its thermal springs, rich in iron and sulphur, and which are still in operation, on one end of the beach of Loutra. Thus Loutra was the first to become a touristic destinations thanks to the 19th century hydrotherapy facility of “Otto and Amalia” as it is known to many. The royal couple tasked the construction of the baths which made use of the area’s natural thermal waters, and its neighbouring guesthouse to the German architect Christian Hansen. The marble baths still operate and, together with the now-derelict guesthouse, have been declared a Historic Monument by the Ministry of Culture.

With a surface of about 100 sq km and a coastline of 104 km, Kythnos is not mountainous, but it’s got stony ground. The highest top is Profitis Elias (St.Elias) on mount Petra, at 336 m height. The vegetation is limited to some olive trees, fig, almond and pear trees, and the pine trees forest of Panagia Kanala is the only exception in this scenery. 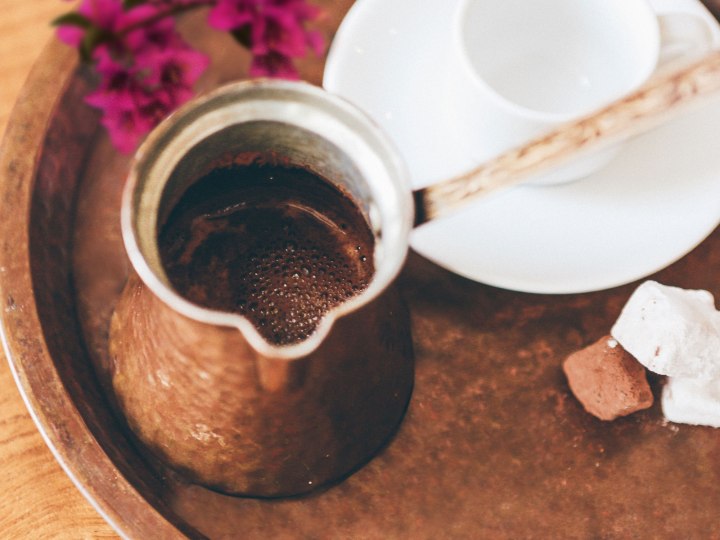 Kythnos feels like home. Don’t expect the breathtaking slopes of Santorini or the hectic bars of Mykonos. Kythnos feels tranquil and welcoming. Here you can enjoy the simple things of life at their fullest, while sipping a Greek coffee (or a specialty one if you prefer), having a stroll up and down the village of Loutra, swimming and, by all means, trying the incredibly tasty dishes that a handful of tavernas prepare daily with the sea catch of the day and the land’s specialties.

But first things first. Kafes prota, meta kalimera, kαφες πρωτα, μετα καλημερα, coffee first, then good morning. When in Greece, I love to have the Greek coffee and, by all means, to have it like locals do: making it a long break and savouring it while chatting with friends or simply enjoying the lively atmosphere of any cafeteria on mainland or any island. Made with a fine ground of coffee, the Greek coffee is boiled in a tall, narrow pot known as a briki, and it is then served with grounds in the cup. The origin of this style of coffee is disputed, as Turkey, along with other areas in the Balkans, the Caucasus, the Middle East, and North Africa lay claims to having created this particular way to make the coffee. This has often been backed by dicey political relationships between the nations. For example, Turkey invaded Cyprus in 1974, straining relations between Greece and Turkey. Those events prompted the name change from Turkish coffee to Greek Coffee.

There are many traditional flavours to try here in Kythnos, and maybe the most well-known one is their organic thyme honey. In terms of gastronomic choices, I love the sfougata (croquettes made with fresh local cheese curds) and all the deliciously fresh fish and seafood, especially the prawns and the mussels.

Like anywhere else in the islands the sardelles tis skaras (grilled sardines), kolios (mackeral) and fried gavros (anchovies) – they all taste great, but by all means any meal should start with the Greek appetizers, the mezedes, especially the tomatokeftedes, deep-fried tomato balls, Santorini style, but I have to say better than any I had in Santorini. You can pair your meal with a bottle of white Assyrtiko Dryopas from island’s Estate Gonidakis. Dryopas means “people of the oak” and the yellowish – light green colour of this great white wine really reflects the shades of the oak wood.

We’re are preparing to weigh anchor and leave Kythnos soon. This is actually my third sailing trip around the Cyclades, so I’ve already written about some of the destiantions, even if this time my intention is to gather many more details on off the beaten track routes, interesting places, great people, original stories and sailing, as this is actually why we’re here for: the wind, the waves, the incredible sense of freedom that navigating a boat can offer. Next stop: Paros island.