“Everything you can imagine is real.” Pablo Picasso

Maybe you recall the scene from the Inception movie where the city could bend under the power of Ariadne’s subconscious:

While this particular effect clearly belongs to the realm of the movies, other scenarios are able to genuinely move reality: the video projections, or video mappings. Using a real and palpable setup – buildings, the projections are especially designed to blur, even if for just a few minutes, the boundary between reality and imagination. They play with the solid appearance of a facade, making it twist and dance in the rhythm of the music, become weightless and fluid, and almost disappear behind the powerful imagery.

I see projections as a way of dreaming with eyes wide open; of disconnecting from everything around, and submerging completely in a fantastic world where anything is possible.

There’s a particular projection I am very fond of: Axioma. I’ve seen it several times and in different places – in Eindhoven, mapped on the cathedral, and in Barcelona, on a Gothic building and then on a late-19th-century factory facade. Also, I’ve experienced it with 3d glasses – Axioma is especially designed to generate this unique effect of each eye receiving a slightly different image so that the brain creates a sensation of spatiality.

Axioma is a story about space, and about ways of pereceiving it. It’s about the infinite – the surrounding big black void containing everything and nothing, escaping through black holes and reappearing as big bangs of energy. The story of Axioma builds gradually: in the middle of the big black void, tiny points lighten up, then lines, then surfaces. Then, more and more complicated structures build up and gain mesmerizing speed… until the culminating point when the intricate shapes seem to travel at the speed of light, just before dissolving into the black space again.

I find Axioma to be intriguing and poetic. The effects are masterly created and hundreds and hundreds of people had the same reaction after having seen it: a big applause.

Leaving aside the visual and sound effects, good enough reasons to see this projection not only once, Axioma made me ask myself – what is, in the end, real? Or more real, if I can say so – the massive facade or the light projection? Regardless the answer, I’d like to live in a world where both are available and interchangeable, and where our buildings can dissolve into light and dance into space. 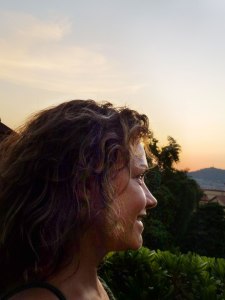